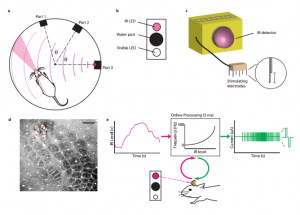 In a previous entry on brain machine interfaces I wrote

Injecting input into the brain need not only be a matter of feedback for control, but as a way to input sensory information in general. In one experiment, a rat was subject to artifcial stimuli corresponding to a virtual object, via directly stimulating neurons responsible for processing touch information from its whiskers (yes, its whiskers you read that right). So one could say that the rat “felt” the touch of a non existent object. Taking the idea even further, one could conceivably create entirely new senses, not linked to a specific part of the body, in order to sense surroundings in ways that do not correspond to anything that our bodies currently perceive.

Seems it’s been done again, but this time allowing the rat to “touch” infrared light. Unlike the experiment mentioned in my previous post, the rat in these new experiments was sensing real (infrared) light, not some fixed and arbitrarily specified virtual object.